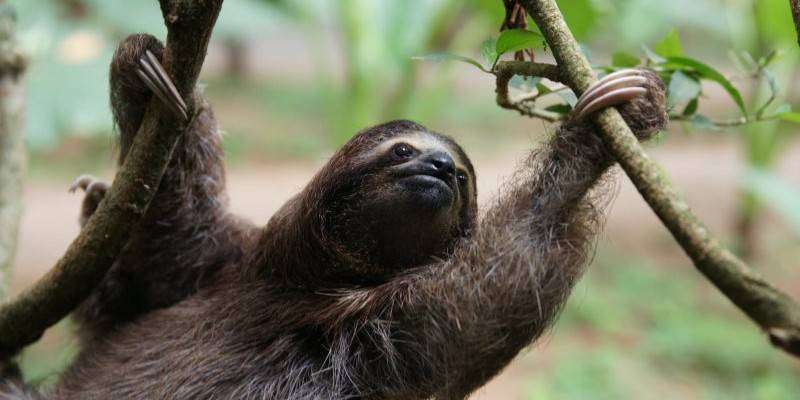 How to spot sloths in Costa Rica

July 15, 2016 By Adriana in South America Comments Off on How to spot sloths in Costa Rica

There’s just something about sloths. From their sweet, smiling faces to their laissez faire way of life – the world just can’t get enough of them. Heck, even Ellen DeGeneres has had them on her show. For the sloths that aren’t starring in YouTube videos or Facebook posts, you can find them  in the tropical forests of Central and South America.

If you want to get off your computer and spot sloths in the wild, one of the best places by far is Costa Rica (it has 5% of the world’s biodiversity after all). But there are some things you should know before you go.

Sloths move so slowly that algae grows on their fur, making for excellent camouflage. And they hang out high in the trees sleeping 20 hours a day. However, if you know what you’re doing, your sloth spotting will definitely pick up momentum (you know, unlike sloths). Here’s how to spot sloths in Costa Rica.

Where to go to spot sloths

Monteverde Cloud Forest itself boasts 2.5% of the world’s biodiversity. That’s a whole lot of flora and fauna packed in just over 100 square kilometers. Located in the Puntarenas and Alajuela provinces, the cloud forest spans six distinct ecological zones. Within the mist-veiled foliage, there’s a good chance you’ll spot some sleepy sloths there.

Santa Rosa National Park is one of oldest and largest national parks in Costa Rica. It’s situated in northwestern Costa Rica, and was once the site of 1856 battle between Americans and Costa Ricans. Nowadays, you can wander the protected park and go sloth-spotting in the tropical forest.

Manuel Antonio National Park is located along the Pacific Coast, where forest, swamp, lagoon and beach vegetation blend together harmoniously. Forbes even named the park as one of the most beautiful parks in the world. Here 109 species of mammals and 184 of birds call home, including (you got it) two and three-toed sloths.

La Selva Biological Station is a protected area in the Heredia Province, which is owned and operated by the Organization for Tropical Studies, a consortium of universities and research institutions. Within this section of tropical rainforest are sloths doing their thing (napping, mainly).

Corcovado National Park is located on the Osa Peninsula in the southwest part of Costa Rica, and it contains 13 major ecosystems. National Geographic has called it “the most biologically intense place on Earth” — so it means business in terms of spotting animals. Sloths can be found here, as well as the 140 other species of mammals.

How to spot sloths

When to go to Costa Rica to spot sloths

Good news for sloth-lovers: these furry friends can be sighted year-round in Costa Rica. So whenever you can get that time off work or wrangle the family for a vacation, sloths will be waiting your visit. After all, it’s not like they’re going anywhere anytime fast.

Ready to spot some sloths? Check our our small group adventures in Costa Rica.