Original blog post featured on The Journal by Intrepid, by Gemma Music.

You might have heard about Kangaroo Island. But did you know it’s seven times the size of Singapore? That it’s the third-largest island off the Australian coast? Or that there are four major towns on the island, and it is home to over 4,000 people?

If you’re curious to find out more, here’s our round-up of the best experiences on the South Australian island.

1. Spot dolphins from the ferry

On Kangaroo Island, the fun starts before you get there. First of all, the drive from Adelaide along the Fleurieu Peninsula to Cape Jervis (the departure point of the ferry) is so beautiful it almost deserves its own spot on this list. But it’s the ferry journey that could easily steal the show, as pods of dolphins are known to follow from the mainland all the way to Kangaroo Island. While dolphin sightings are not guaranteed, it’s worth keeping your eyes out for these friendly creatures.

2. Slide down the dunes of Little Sahara 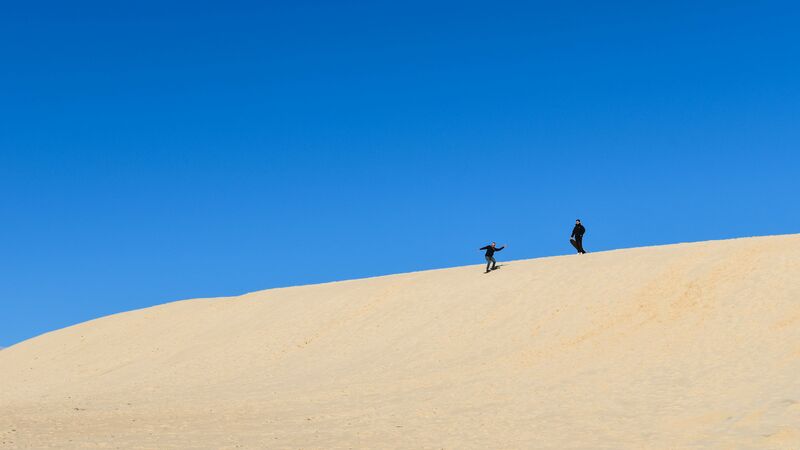 Here’s a crazy fact about Little Sahara: it’s believed to have formed only 7,000 years ago (which isn’t THAT long ago when you think about). And when you stand at the top of the dunes, looking out as far as the eye can see, it’s hard not to be impressed by the great hunk of dunes surrounded by seriously dense forests and vegetation. Crazy stuff.
At this natural phenomenon, you can break a sweat by running up the dunes then sandboarding or tobogganing your way down.

3. Say hello to the locals at Seal Bay Conservation Park How many seals can you see in the distance?

At Seal Bay, a protected marine reserve, the resident sea lions are lucky enough to have this beautiful, white-sand beach all to themselves. Here, you can wander through the colony (accompanied by an experienced guide) along a boardwalk and even onto the beach where endangered creatures laze about.

Once upon a time, distilling eucalyptus oil was one of Kangaroo Island’s biggest industries and dates back to the 1880s. As you stop at the Emu Ridge Eucalyptus Oil distillery, you can learn all about the production process, history and more. Maybe even pick up a few bits and pieces while you’re there. Watch these furry creatures in their natural environment.

For animal lovers, the island is home to an enormous array of wildlife – grey kangaroos, fur seals, dolphins, echidnas, koalas and dozens of other species that have flourished on the island without the threat of introduced species. Think of it as a mini Galapagos off the coast of South Australia.

Did you know Vionne Bay was once voted Australia’s best beach? Harrier River is just behind it, and it’s the perfect kayaking spot – you can paddle your way down to where the river feeds into the ocean. If kayaking isn’t your thing, there are plenty of trails in the area to hike and cycle along or you can swim until the sun goes down. With barely another soul in sight, it’s just as relaxing as you’d expect. The name says it all, really. As one of the signature landmarks on the island, the Remarkable Rocks are believed to have formed more than 500 million years ago. And over time, Mother Nature has worked her magic to carve the unusual shapes you can see today; making these giant, lichen-covered rocks a must-visit stop. Plus, the views over the Southern Ocean from here are the definition of jaw-dropping.

If you thought the Aussie sea lions were cute, wait until you see the New Zealand fur seals that hang by Admirals Arch. Admirals Arch is just a short drive away from the Remarkable Rocks, so time-poor travellers can easily squeeze both into their travels.

What surprises most people who visit Kangaroo Island is the number of breweries, gin distilleries and local producers on the island, showing the mainland how it’s done. Here, you can taste island-grown olives, sample honey sourced from the Ligurian bee, feast on locally caught seafood, marron or oysters and then wash it all down with your choice of beverage. If you consider yourself to be a foodie, you’re in for a treat.

Contact us if you’d like to know more about visiting this beautiful part of our state, including on Intrepid’s 2 day Kangaroo Island Adventure.

All photos by Gemma Music.