September 24, 2015 By Adriana in Europe Comments Off on Intrepid Greece Tour

Greece is often called the birthplace of Western civilization, including democracy, the Olympic Games and major scientific and mathematical principles. The history is still present in the capital Athens, with The Parthenon on the Acropolis of Athens, as one of the best known symbols of classical Greece. But it wasn’t this that drew me to visit Greece. It was the visions of the whitewashed, cubist houses on the clifftops of Fira and Oia on the island of Santorini that overlook the clear Aegean Sea.

I did the Intrepid 8 day Athens to Santorini Original Style Tour. This small group tour (12 people) started in Athens at the Attalos Hotel. This hotel was clean and basic but did have one wonderful feature. The rooftop bar. The view from the roof was magnificent and looked straight across at the Acropolis. Staff were also very friendly and accommodating to any requests. 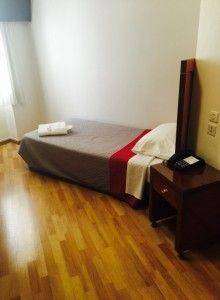 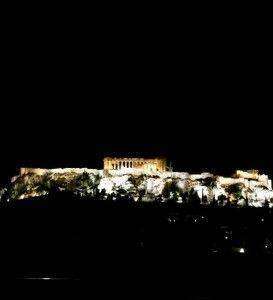 Athens is a friendly city, a contrast of new and old, clean and dirty; with lots of restaurants, designer and well-known name shops and a bustling flea market. The coble stone streets and hills make for an effort walking around at times but even with the hot sun beating down, it is well worth exploring every corner of this city. We spent time walking around the city and seeing Syntagma Square, The temple of Olympian Zeus and of course the Acropolis, where you can walk through the Pantheon and enjoy fabulous views over the city.  From here you can see all the way to the ocean. The Acropolis while in a state of disrepair (or repair…the Greek government has been renovating since 2004!)  is a great place to start exploring Greece. The new Acropolis museum is worth a wander through also as the artifact’s are all housed here.   Food tip – for an amazing healthy lunch or smoothie break, try Avocado, Nikis 30, Syntagma. Also for an amazing Greek meal head across from the Acropolis Museum to Liondi Traditional Greek Restaurant on Makrygianni Street 19-21. I guarantee you will be in a delightful food coma afterwards! 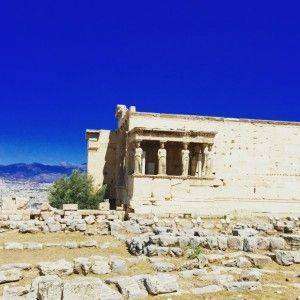 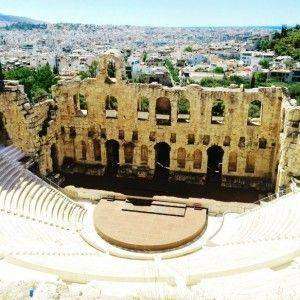 Day two of the tour we departed Athens early and took the Metro to the port of Piraeus. Here we caught our 4 hour ferry to the Island of Syros. In the heart of the Cyclades, Syros features the typical whitewashed houses and gorgeous white sandy beaches. Syros did not feel touristy and we spent our time enjoying the delightful beaches in various bays around the island. The next day we walked through the town of Ano Syros and climbed the narrow alleyways and endless stairs, to the top of the island.  The views were spectacular. While not an easy walk it was well worth it. 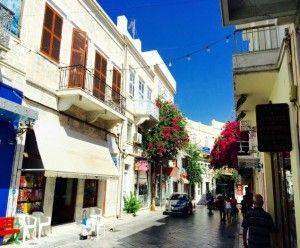 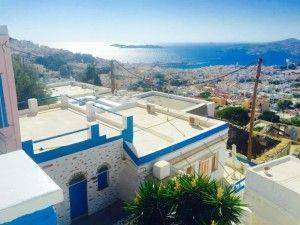 From Syros it was a two hour ferry to Mykonos. The ferries were surprisingly well organised and comfortable. I would suggest anyone suffering from motion sickness still take precautions though. The weather was good on the days we travelled but the movement was quite noticeable.

Mykonos is known in ancient Greek mythology as the battlefield where Zeus fought the Gigantes. Today it is best known for its style and its nightlife.  There are many cobble stone alleyways containing galleries and boutiques. Little Venice is the place to go for a cocktail and enjoy the sunset. I was looking forward to the nightlife here but it doesn’t really kick off until well after 1am.  Nice for those who can sleep all day! Mykonos has a lot of beaches tucked away and the easiest way to discover them is by hiring a car or scooter here. Expect black pebbly beaches hidden into the bottom of mountainous locations for some more spectacular views. The island of Delos is an option for a half day trip to explore more mythological sites. 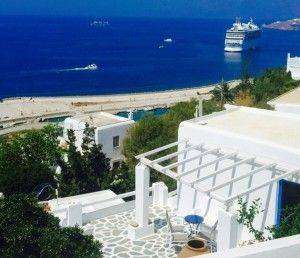 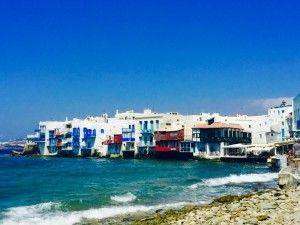 Another three hour ferry ride took us then to the island of Santorini. A volcanic island known for its natural beauty, Santorini did not disappoint.  The local buses are well organised from the town of Thira. Our first night there, we took the bus up to Oia for a spectacular sunset.  We joined with every other newly arrived tourist on the island and crammed the laneways trying to capture the perfect picture of the setting sun behind the ocean.   Oia has a labyrinth of pathways leading past different shops and restaurants all on the cliff top.    There is a walk along the Crater rim from Thira to Oia for the most amazing views.  This is a strenuous hike with uneven and loose gravel surfaces so not for the faint hearted.   There is also a day tour across to Volcano Island where there are hot springs.  Santorini also has many wineries to be discovered.   Santo winery offers a platter and wine package and is a great place to watch the sunset from.

The beaches here are less pebbly but do have black sand. Well laid out with deck chairs and drinks on demand, this was a perfect relaxing end to my stay in Greece.

The Intrepid tour was well paced and allowed quite a bit of free time away from the group if wanted.  The group leader was available for local insights and restaurant recommendations.

The glorious fresh food, sightseeing of ruins and scenery and relaxation on the gorgeous beaches made for a fantastic holiday.  The question is not, “Will I return to Greece?” but “Which islands should I discover next?!” 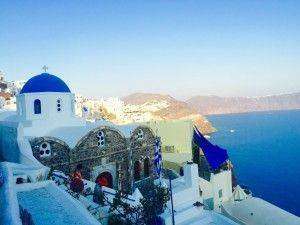 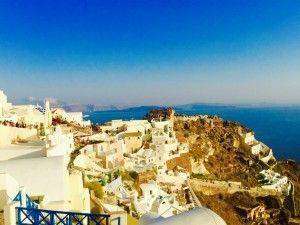 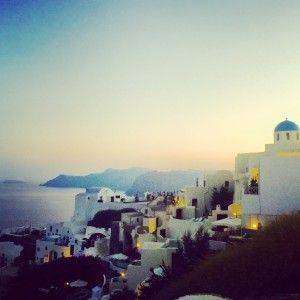