The Centenary of Armistice in the Mediterranean

The Centenary of Armistice in the Mediterranean

When Gallipoli was evacuated many of the troops went on to other Mediterranea fronts; the British and French to the Salonika Font in northern Greece, the Anzac Mounted Division joined Britain’s Egyptian Expeditionary Force and the Indians went to Mesopotamia. These were campaigns fought against disease and the climate as much as against opposing troops. They endured and this voyage commemorates the beginning of the end of the First World War. Weeks before the November 1918 Armistice with Germany, Armistices were signed in Greece with Bulgaria and the Ottoman Empire. It was here on these largely forgotten fronts in the Eastern Mediterranean that survivors could start to think about a life without ‘the War.’

‘The War’ did not end tidily though; for the people of Britain and its Dominions a different struggle started, the struggle to live with what had happened. Nearly ten million servicemen died during the First World War but double that number, twenty-one million, were wounded; as well, huge numbers of civilians had been displaced. This constituted an unprecedented public health disaster in communities world wide for people already exhausted, both personally and materially, by the efforts of years of war. Worse was to come, the global influenza pandemic of 1918-19 struck down probably as many people as had died in the war. It was particularly virulent among healthy young adults, especially among those who had survived the first three years of the war.

This voyage in the Aegean returns to the landscape of war these survivors knew during the First World War; servicemen and women on these fronts had been away from home for years. Repatriated, they found home had changed while they were way. There were to be times of uncomfortable tension between those that had been ‘on the home front’ for the duration of the war and those that had been ‘on active service’. 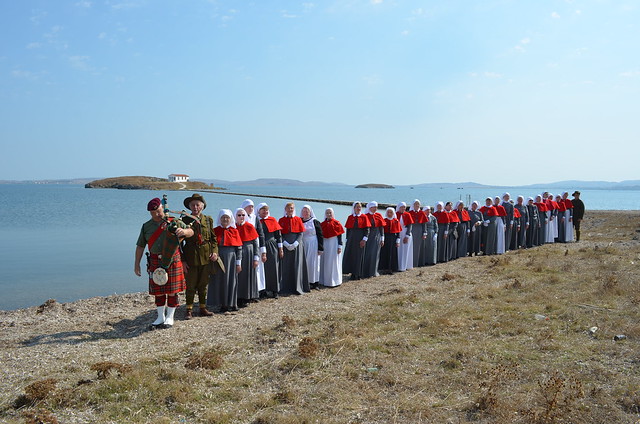 Trip Name
The Centenary of Armistice in the Mediterranean
Days
10
Overview
Vessel Type: Sail Cruiser Length: 54 metres Passenger Capacity: 49 Built / refurbished: 1993 / 2008 / 2012 / 2015 Launched in 2004, fully renovated in 2012 and upgraded again in 2015,  the two-masted Panorama II is a 164 foot motor sailer accommodating just 49 guests. If you find large resort style vessels accommodating many thousands of passengers attractive then of course this isn’t the vessel for you. However, if you prefer an informal and warm atmosphere more akin to a private yacht combined with an itinerary dedicated to both discovery and relaxation then you need look no further.  All the cabins on board Panorama II are designed for comfort and have a nautical feel with light fabrics and wood trimmings. Cabins range in size from 97 to 173 square feet and those located on the Upper and Main Decks are equipped with windows, while those on the Lower Deck have portholes. Cabins either have twin beds or fixed double beds. (Cabins  A1, 1, 2, 3, 4, 14, 15, 16, 17). Facilities include en suite bathrooms with showers, cabin TV (for DVD only), mini-fridge, safety deposit box and hairdryer. The public areas include a main lounge and bar with comfortable sofas, a restaurant located on the Lower Deck and the Upper Deck al fresco dining area where meals can be enjoyed when weather permits. There is also a swimming platform enabling guests to swim when weather and anchorage conditions permit and the Upper Deck provides a generous semi covered or sun exposed space with sun loungers and chairs, ideal for relaxation and fantastic views.  Located on the Lower Deck, the indoor dining room seats all passengers in a single, unassigned seating and offers generous buffet space. The aft area on the Upper Deck provides a generous semicovered area where guests can enjoy meals al fresco with wonderful views, weather permitting. Food is served at the table or displayed on the hot and cold buffets stands. The menu is Greek and international, with a focus on local specialties. On each itinerary, we have included the opportunity for you to dine ashore independently allowing you to experience the local flavours.  During the day, life on board focuses around the indoor lounge area, and the indoor dining room, as well as the open and inviting deck areas. These are natural gathering places and perfect for enjoying your meals al fresco, settling into a comfortable chair with a good book or socialising with your fellow passengers and enjoying the views. The swimming platform on Panorama II’s stern enables you to swim off the yacht when weather and anchorage conditions permit. (only applicable for voyages around Greece).  Deck plans vary depending on cruise operator, please check for details.