Antarctica – the trip of a lifetime!

September 11, 2017 By Adriana in Polar, Special interest No Comments

It’s the trip of a lifetime, on most traveller’s bucket list. There are a whole list of reasons why you should make visiting the majestic seventh continent a reality! Unique wildlife, exceptional views, breathtaking glaciers and experiences you had never thought possible – we sat down with one of Australia’s leading Antarctica experts to get the scoop on what makes Antarctica so amazing. 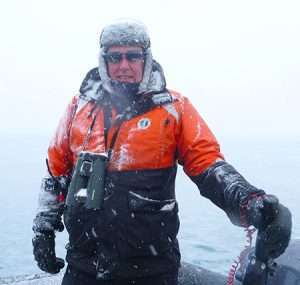 David McGonigal is one of Australia’s leading travel writers and travel photographers. His books and articles have appeared worldwide and his photographs have been exhibited on several

continents. Widely regarded as an expert on the polar regions – he has been to Antarctica every year for the past 22 years. David has published three of the best-selling polar books, including his most popular publication ‘Antarctica: The Complete Story’ which he co-wrote with Dr Lynn Woodworth.

David is currently an expedition leader aboard One Ocean Expeditions and takes travellers to visit, learn and experience Antarctica every year on their cruises.

It was in 1995 when I was fortunate enough to visit the Ross Sea on the Kapitan Khlebnikov, a full-strength icebreaker. I fell in love with the place and just keep coming back.

At first, I just wanted to get back to Antarctica in any capacity. So I‘ve lectured in history, photography, ice, geography and politics while driving Zodiacs on most excursions. I became an Expedition Leader because I wanted to be able to shape the whole experience – on an average voyage you have a million dollars worth of dreams to fulfil. Summer – unless you want to bring a torch. The earliest you can be there is October and the latest is March. It depends what you want. Early season is pristine with lots of snow and ice, mid season is when the penguin chicks are around and the end of the season is a whale bonanza.

While there are a lot of animals there are not a lot of different species. Of course there are the penguins and you’d hope to see Adelies, Gentoos and Chinstraps – maybe Macaronis, too. Seals are Crabeaters, Weddell and the ever-curious Leopard Seals. Whale species are mainly Humpbacks (the most interactive with our boats), Orcas and Minkes. Of course, there’s also the Drake Passage between South America and the Antarctic Peninsula – there you may have large whales like Seis, Fins and even the rare Blue Whale as well as many Albatross. Of course, if you include South Georgia you’ll have a whole bonanza of wildlife. 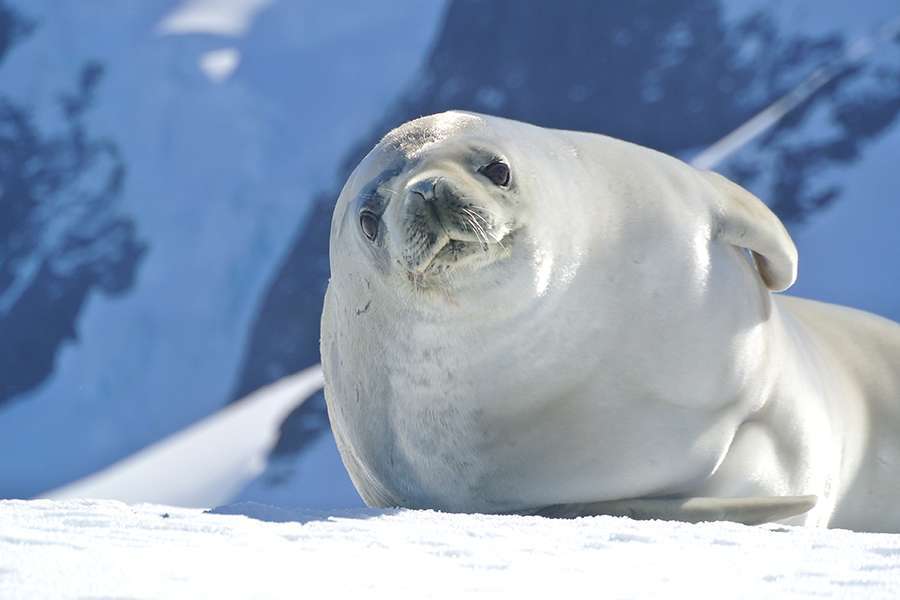 By the end of January the humpbacks are well fed and curious. Having a 30-tonne humpback lunge out of the water close enough to touch is pretty special. But so is holding eye contact with an alpha male orca.

Wake at 7am, breakfast at 7.30am and into Zodiacs at 9am either to cruise around icebergs or land at a penguin colony – or both. Back for lunch while the ship moves then back in the boats from around 2.30pm to 6pm, returning for happy hour and dinner. Often spending some time on deck in the evening watching the sun over the ice, mountains and glaciers while observing penguins and whales in the water. Bed around 11pm with the alarm set for 7am. Just about everyone comes to Antarctica to see the animals but they keep coming back for the ice. The shapes and colours of icebergs unfolds like a surreal sculpture gallery. Some want to swim, others want to camp and a few are down to kayak through the ice. I’d simply suggest that you don’t miss any excursion – you’re only there for a few days and each excursion is likely to present some amazing highlights.

Allow the extra time and cost and take the South Georgia itinerary. South Georgia is every staff member’s favourite. There’s incredible wildlife, amazing scenery and all the Shackleton history. As I’ve written ‘it’s where God takes his holidays’.

This past February we found some fast ice – where a bay was still frozen from winter – and I asked the captain if he could “parallel park” alongside it so we could step directly onto the ice from the gangway. While everyone went for a walk to explore an iceberg stuck in the fast ice (with a Weddell seal in attendance) the hotel staff set up a bar on the ice. While we were all lazing around in the sun having a drink a group of curious Adelie penguins arrived and walked amongst us.