10 fun festivals around the world

February 15, 2017 By Adriana in Our Unforgettable World, Travel Tips No Comments

For those of us residing in Adelaide, festival time is about to begin. The Adelaide Fringe starts this Friday and with that comes a snowball effect of other events such as WOMADelaide, the Adelaide Festival and the Clipsal 500. Our city streets are filled with people enjoying everything this great city has to offer – a time us locals fondly refer to as Mad March.

The vibrant city nights, world class shows, delicious food and (mostly) beautiful weather, it’s not a wonder it’s most South Australian’s favourite time of the year. All this excitement has got us thinking about some of the amazing festivals that happen all over the world and all year round. So we’ve put together a list of 10 of the most fun and interesting festivals around the world that we think are worth experiencing. Some you may have heard of, some not so popular – but all a great way to experience something different in a foreign city.

When: usually from the end of December to mid-February, depending on weather
Where: Harbin, China
What is it: This ice and snow sculpture festival started around 18 years ago and now claims the title of the world’s biggest ice sculpture festival. The sculptures are truly magical and span across three venues; some can be visited only during the day, some are specifically designed for kids to enjoy and an area containing breathtaking palaces and icons that are colourfully lit up at night. It takes around 15,000 workers to put the festival together and with 10-15 million visitors annually it’s definitely worth braving the freezing cold temperatures to witness these majestic creations.

This video by Lonely Planet gives you a glimpse into just how magical and dramatic these ice sculptures are. 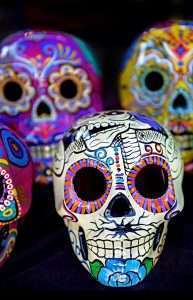 When: 2 November
Where: Mexico City, Mexico
What is it: The Day of the Dead is a Mexican holiday celebrating friends and family members who have died. People gather together in traditional costumes and make-up and pray for and remember loved ones who have passed away, as a way of helping to support their spiritual journey. It’s celebrated all over Mexico and by Mexican ancestors living all over the world. As well as dressing up, tradition calls for people to light candles and bring bouquets to the graves of family and friends. In 2016, Mexico City held its first ever Day of the Dead parade, which was attended by thousands and a great way to immerse yourself in this colourful and interesting holiday.

When: Friday before Ash Wednesday (for 5 days)
Where: Rio de Janeiro, Brazil
What is it: Rio Carnival is the epitome of a massive party. Dancing, singing and elaborate costumes take over the magnificent city of Rio de Janeiro as the streets, squares and bars become one huge celebration. The star of the show is of course the Samba Parade, a highly elaborate display of the amazing talent of Samba school’s across Rio. The colours of the floats and costumes and the rhythm of the music is enough to have anyone up on their feet dancing along and enjoying the fun.

When: falls in either October or November each year, depending on the cycle of the moon.
Where: India (but it is celebrated all over the world by Hindu’s)
What is it: Diwali is the Hindu Festival of lights, spiritually signifying the victory of good over evil and brightness over darkness. It is a five day festival, however the third day is when the celebrations occur with small clay lamps and candles lit and placed throughout the cities and fireworks let off to mark the occasion.

Oktoberfest – or Weisn to the locals

When: the last couple of weeks in September and first weekend in October
Where: Munich, Germany
What is it: The world’s largest beer festival! The festival is an important part of Bavarian culture and has been held since 1810. There’s a huge selection of beer tents and local businesses getting involved, locals and tourists alike can enjoy traditional Bavarian cuisine, side stalls and games and of course drinking copious amounts of Bavarian beer out of traditional steins. People from all over the world travel to Germany for the event, with an estimated 5.6million people attending in 2016 across the 17 days. Some visitors even dress in traditional Bavarian Dirndl or Lederhosen to get into the spirit of the festival. Visit this amazing city for this historical festival and say Prost with a stein of beer in one hand and a pretzel in the other!

When: the first week in October
Where: Alberquerque, New Mexico, USA
What is it: Each year the New Mexico sky is decorated with 700 hot air balloons, the largest hot air balloon event on earth. People come from all over the world to witness this spectacular site. Taking off from a 310,000 square metre field, the balloons light up the sky both during the day and at night and is a magical site to witness.

Here’s a short snippet from the Albuquerque Balloon Fiesta – showing just how amazing the balloons are to see.

When: the last Wednesday in August
Where: Bunol, Valencia, Spain
What is it: Unlike most festivals, there is no significant meaning behind La Tomatina. It really is just a huge food fight – with 100 metric tonnes of tomatoes – for fun! The weeklong festival also features music, parades, dancing, paella cooking contests and fireworks. The throwing of tomatoes usually lasts between 1-2 hours. A quick tip if you decide this is an experience you must not miss, be prepared to throw away the clothes you wear and bring some protective goggles if you don’t want tomato in your eyes.

When: February
Where: Pingxi, Taiwan
What is it: In the past people would traditionally send lanterns up into the sky as a way to send wishes up to God or ancestors in heaven. The Pingxi Sky Lantern Festival itself has only been going for a couple of decades and is held to celebrate the first full moon of Chinese New Year (the 15th day of the first month in the lunar calendar). People come from all over the world to write their wishes for the new year on lanterns and release them, creating a glorious display filling the night sky.

When: the Tuesday before Ash Wednesday (47 days before Easter)
Where: New Orleans, Louisiana
What is it: Mardi Gras is the last day of the Carnival season before Lent. However, the festivities begin in January and its recommended that if you want to experience all of the fun and festive atmosphere that New Orleans Mardi Gras has to offer you arrive for the extended weekend before the Tuesday. Extravagant parades, colourful and fun costumes and masks and of course catching the Mardi Gras throw are just some of the highlights. Suitable for the young, old and families it’s a great addition to any Southern American itinerary. Enjoy the Southern hospitality and be sure to try some delicious southern food along the way!

When: 17th March
Where: Dublin, Ireland
What is it: Commemorating Ireland’s Patron Saint, Saint Patrick, this festival celebrates the heritage and culture of the Irish. Where better to experience this cultural and religious holiday than in its home city of Dublin. There’s a range of events that usually happen over a three day period as well as a spectacular parade that makes its way through the heart of Dublin City. Sip on a Guinness, soak in the fun atmosphere and disappear into a sea of green in Ireland for St Patrick’s Day!