Original blog post featured on The Journal by Intrepid, by Liv Bohn.

While most of South East Asia is suitable for women exploring alone, these are spots I have visited that I think are really safe, friendly and comfortable as a solo female traveller. Not to mention, totally beautiful!

If it’s your first time in the region, they are a great place to begin. Thailand is an amazing starting point if you’re new to travelling solo. It’s much more modern than its neighbouring countries, making transportation easy and food convenient. There’s also a large number of other foreign expats and travellers here. Rather than heading straight down to the islands, where the party scene and number of groups of friends travelling together can be overwhelming, I find the northern parts of the country offer a calmer introduction.

Chiang Mai is a laid-back city with a buzzing backpacker scene and tons of things to do. After a few days, you can head up to the misty hillside of Doi Mae Salong where you’ll find lush tea plantations, interesting markets selling local crafts and an impressive Buddhist temple. If you want even more of an adventure, there’s plenty of trekking and biking trails around Chiang Rai, which will show you the best of the north and introduce you to the unique hill tribes that occupy the region. Myanmar is new enough to the backpacker trail not to be over-run with party-goers. Yet it still hosts a steady stream of other travellers, which will make sure you’re not lonely for long. The country itself is a true highlight of South East Asia – with some incredible sights and very friendly local people. I would recommend starting on the tourist trail to get your bearings. First, head to magical Bagan and watch the sunrise over the 2,200 temples. Then if you want to see more of village life, consider trekking around Shan State. Kalaw is a brilliant place to start and trekking agencies here will often team you up with other solo travellers, so you have a readymade group for a few days.

EXPLORE MYANMAR ON THIS 15 DAY ADVENTURE Like Thailand, you’ll find Vietnam to be modern and convenient in many ways, but also a cultural paradise. For first time travellers, following the coastline is an ideal route to take in the best of the country. A train line also conveniently runs along most of the coast, as well as buses on generally well-paved roads.

Start in the buzzing metropolis of Ho Chi Minh City, then head up to Dalat, Hoi An, Hue, Halong Bay and Hanoi. You’ll find the mix of beautiful beaches, incredible food, buzzing market and ancient architecture totally intoxicating. And the range of safe, clean accommodation and friendly locals make it a great spot for solo female travellers.

CRUISE THE COAST OF NORTHERN VIETNAM ON THIS 8-DAY VOYAGE Singapore is often overlooked by travellers to South East Asia, but it is really much more than the big bland skyscraper city its often made out to be. Singapore is one of the safest cities in the world, and the huge mix of Asian cultures means it’s the perfect spot to get acquainted with Asian life and culture in a secure and clean environment. The hostel scene in Singapore is also really strong, and it’s a great place to meet people, enjoy some great food and culture before heading north.

In Malaysia, you’ll find quaint towns like Malacca (Melaka), foodie paradises like Penang and the stunning beaches of Langkawi. The country is small enough to only have a few hours transit between each destination and there’s plenty of places to stay along the backpacker trail.

EXPLORE MALAYSIA ON THIS 15 DAY ADVENTURE

Bali and the Gili Islands 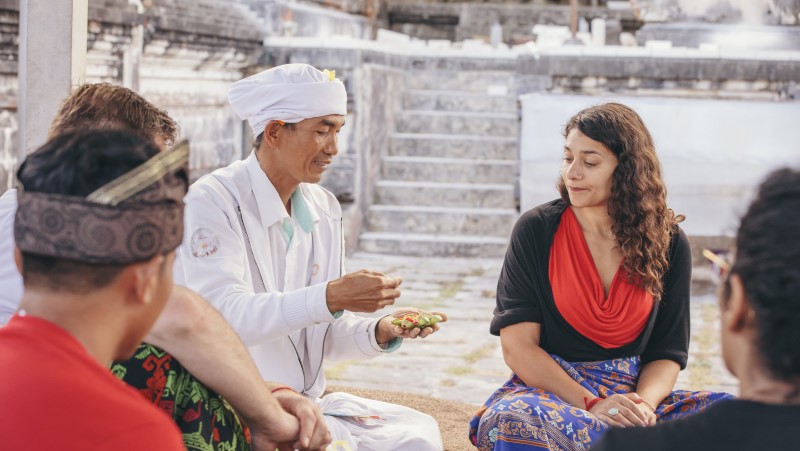 Indonesia is high on many bucket lists for good reason. It’s beautiful, with a huge number of islands and lots of variety. Cities like Jakarta can be difficult places for solo women, but the unique island of Bali is a traveller’s dream.

From the hippie paradise of Ubud to the surf beaches of Canggu and the volcano and waterfall hikes in the north of the island, Bali could keep you occupied for weeks. The huge array of solo travellers and digital nomads on the island make it a great place to meet other travellers too. If you’re craving a paradise beach and quieter vibe, head over to the nearby Gili Islands for a few days.

A few final words of advice

If you’re a solo woman heading to South East Asia for the first time, my biggest piece of advice is – don’t be afraid. You are about to have the time of your life. Stay safe, stay aware, stay open and enjoy every moment!